You have no item(s) in your cart 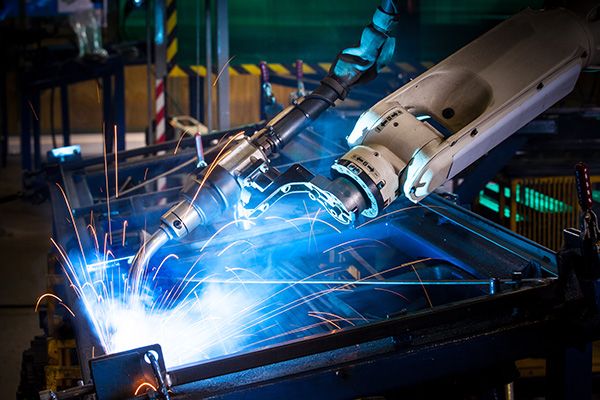 Equation 1-3: Q = KRI ^ 2t
Where I is the current intensity, R resistance, t time and Q heat. Current and time intensity factors can be controlled through a resistive welding machine. But the electrical resistance depends on several factors such as sex and thickness, workpiece, pressure between the electrodes, size and shape and sex of the electrodes and how the work surface means its smoothness and cleanliness.
Figure (1-3) shows a schematic overview of the various resistors along the flow path. The Joule formula R (0-1) is usually the sum of the resistances we have in the system:
Equation 1–3: R = ∑rj T
r1 and r5 are the contact resistance of the electrodes to the working surface [1], which are unwanted resistors that cause heat dissipation as well as electrode adhesion to the working surface. The electrodes are affected by this resistance, as well as the pressure and sharpening of the surfaces will reduce these resistances. It is important to note that with the proper cooling of the electrodes, the resistivity r1 and r5 will also decrease. Because increasing the temperature of a material also increases its electrical resistance. r2 and r4 are two pieces of electrical resistance (sheets) which, due to the low electrical resistance of metals, usually have little value compared to other resistors.
Equation 1-3: (r2, r4 = S (S / L
Where s depends on the material of the sheet and L is the thickness of the sheet and finally r3 is the common season resistor which has the highest value among these resistors because: Resistance can also be increased.
Secondly, since this resistance is related to the two-part junction, it has a higher resistance than the resistance between the parts and the electrodes (r1 and r5). It is important to note, however, that in the current transfer path from the source of production to the electrodes, there are continuous resistances that cause heat and current loss and must be taken into account when calculating the amount of current required for welding.
Of course, measures can be taken to reduce the amount of heat generated or to increase the temperature of the current transfer components, which will be discussed in greater detail later in the chapter.
Resistance welding machines consist of two general units:
Electrical unit (Thermal), Pressure unit (Mechanical). The first is to raise the temperature of the weld position; the second is to create the pressure required to attach the two parts to the welding site.
The forces acting can be manually, hydraulically, pneumatically and hydropneumatically. Pressure will continue until the freezing phase. This pressure causes the edges to overlap and the air does not enter the melt pool or melt. The following chapter discusses the desirability of applying pressure and its effect on the quality of welding.
Electrodes are made in various forms in resistive welding processes. The electrodes in these processes must direct the electrical current to the coupling position while maintaining the sheets together and producing the desired pressure and rapid concentration of heat in the coupling position.
The electrodes must have the following characteristics:
2. Have good strength and hardness and do not crush under pressure.
They have high annealing temperatures.
Have proper electrical conductivity.
They have high thermal conductivity.
The electrodes are made of special materials and alloys, which will be discussed in more detail in Chapter II. The various forms used are also discussed.
However, the spot welding process is a process with the highest thermal concentration (about 1%) and the lowest energy loss between different welding processes. Also, the problem of the complexity of the component due to heat and the area affected by heat (HAZ) is less prominent in this process. There is also no position limitation of the welding and can be welded to different positions with a device appropriate to that situation.
Benefits of this process are no need for consumables, protective gas and filler metal. The process is also environmentally sound, as well. There are also limitations to this welding method:
2. It is difficult for metals with high thermal and electrical conductivity and requires special equipment with special arrangements.
2. Metals that are susceptible to rapid cooling and warming require special equipment and also have a maximum thickness limit (thickness of 1 to 2 mm).
If welding non-ferrous metals which have naturally varying electrical resistances, it should be noted that the melt region grows preferably toward the metal with greater resistance, as this area generates more heat. To avoid this problem, the electrode with the lower diameter or the resistor electrode may be used on the side with greater resistance. However, when welding non-ferrous metal, one must pay attention to the chemical composition of the alloy formed by the molten pool, its mechanical properties.